Successful story of a 16 years old girl in Elimination of Gender Based Violence shelter Yangon, Myanmar 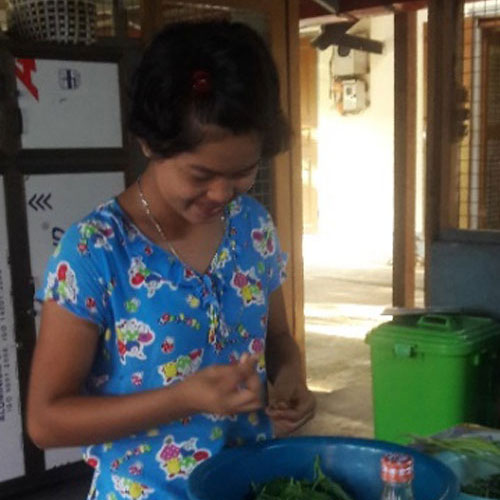 Mu Mu (not real name) is the elder daughter of the two siblings and her family is extremely poor. Her mother divorced her father and got married to another man.  She has a son from this second marriage. They live in remote area where most people are robbers and thieves. She quitted school after grade 6 and looked after her step brother whom she loves so much. Her mother earns by washing clothes from house to house to provide for the family while her step father is working odd jobs.

One evening, her mother sent her to her aunt’s house to do errand. On her returning home, she was snatched by a drunkard (who is married with children) in a dark place and raped. She tried to defend herself but was not successful as he was stronger than her. She rushed home and told her parents everything that happened to her in tears. As soon as her step father, who has been sick for many months, heard this inhuman act, he got a stroke.  Her mother got very angry. The very next morning, her mother went to ask help from the women association in their township. The person in charge took her to Young Men’s Christian Association (YMCA) that works for women and girls’ rights.  A police report was made and the criminal was arrested.  He is now in prison. As the case is on-going, the girl is in danger because the man’s relatives are quite rude and want to harm her. The association requested GSMF for her safety.

She felt it was very challenging during her initial stay in GSMF.  She had nightmares related to her traumatic experiences and was depressed. She was crying most of the time, she couldn’t express her feelings and wanted to be alone. Through the individual and group counseling, and therapeutic approach given to her at the shelter, she began to open up, shared her traumatic experiences and was able to name her feelings. Ms. Grace, an art therapist from Singapore also could help her to be healed bit by bit and later Ms. Imogen North, a professional Yoga teacher came once a week and supported her to regain her healthy body and mind.

Tremendously, she was recovered, became happier and was able to help other women in the shelter. She came to realize that nevertheless she was raped and experienced tragedy; she still is a valuable person with dignity and has the ability to make options for the future. Her mother and step father are happy over her recovery process. She is now encouraging and helping other women especially who have small babies.And she also learned basic computer and sewing skills. She said that she wanted to express her gratitude towards GSMF by contributing her potentials as much as she can. She is still in in need of safe and sound environment until her case in the court is over. Her is very much interesting in cooking. So, we allowed her to take course on bakery and Chinese food. Her counselor recommended that it could be another healing process class. She is now supporting happily in our shelter. She has now enough self-confidence and ready to move on toward her bright future.

In November 2019, after 2 years and 2 months of her case, the justice she has been longing for daily came true; the perpetrator was sentenced for 20 years. Her family, she herself and we received this news as “JUSTICE” for the women and girls experiencing gender based violence.