The first missionaries Sisters of the Good Shepherd were sent to Myanmar in 1865 from Angers, France by our foundress St. Mary Euphrasia responding to the request of Bishop Paul Ambrose Bigandet, the first Vicar Apostolic of Lower Myanmar.

Upon arrival in Myanmar on 8th February 1866, the Sisters began to manage a School in Yangon formerly run by the Sisters of St. Joseph of the Apparition. Down the years, the Sisters gradually expanded the Good Shepherd mission in Yangon establishing Schools, boarding facilities and a home for disadvantaged girls and women.

In 1966, with the nationalization of the schools and the expulsion of missionaries, all the Good Shepherd missionaries were forced out of the mission and the country, leaving behind 10 local young Sisters, 9 of whom were in initial formation. In 1967, the Myanmar sisters were brought out of the country for formation and international experience. There were no Good Shepherd Sisters in Myanmar from 1967 to 1973.

The year 1973 marked another significant date in the history of Good Shepherd in Myanmar as the Sisters returned to refound the congregation and to re-establish the Good Shepherd missions in their native land. Since 1973 up to the present, Myanmar Good Shepherd Mission has extended to 5 dioceses. At this time of 150th Jubilee celebration, 50 Good Shepherd Sisters in 6 communities and 3 satellites together with lay mission partners, are responding to the needs of the people in Myanmar.

On the 4th of February, 2015 Myanmar Good Shepherd Sisters all over the country gathered in Yangon community which was the first community started in 1866 by the missionaries sent by Mother Foundress from Angers. On the 5th February, the Jubilee launching and thanksgiving Mass was celebrated at 6 am with Good Shepherd staff, lay associates, friends, benefactors and people in our Good Shepherd ministry. During the Mass, the Jubilee logo and the Jubilee staff were blessed. At 9:30 am, the Sisters started a half day recollection and sharing on the Jubilee year reflection paper. In the afternoon at 2:30 pm, Sisters and all Good Shepherd people gathered together for the opening ceremony of Jubilee year by a simple and meaningful ritual. 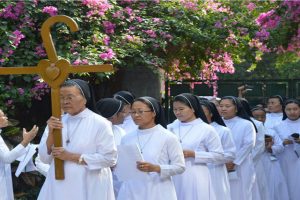 The ceremony began with a procession from the gate to the community parlour led by the refounding Sisters carrying the Jubilee staff. 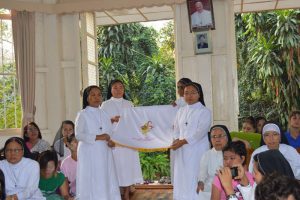 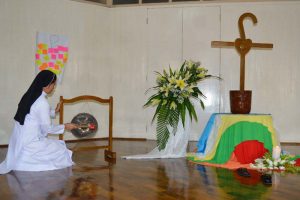 Finally, the opening of Jubilee year was announced officially by beating the Myanmar traditional gong by each Myanmar Sister totalling 150 times. The launching ceremony was concluded with a Jubilee prayer and the Jubilee theme song. 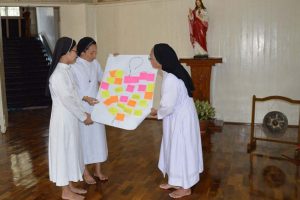 In order to mark the journey of founding different communities, the Jubilee staff will be received by each community for one month during this year. While the Jubilee staff is there, the respective community together with local people, will have jubilee celebrations. 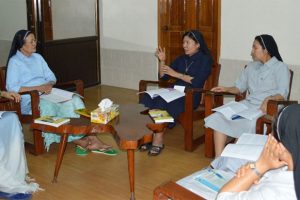 As a spiritual preparation, the Myanmar Good Shepherd Sisters will be having Jubilee reflection and community sharing every month starting from February 2015 and ending in January 2016. Our Jubilee theme is, “Rooted in God and in Reality…Remembering the past with gratitude…Embracing challenges with hope…taking risk together for mission.”